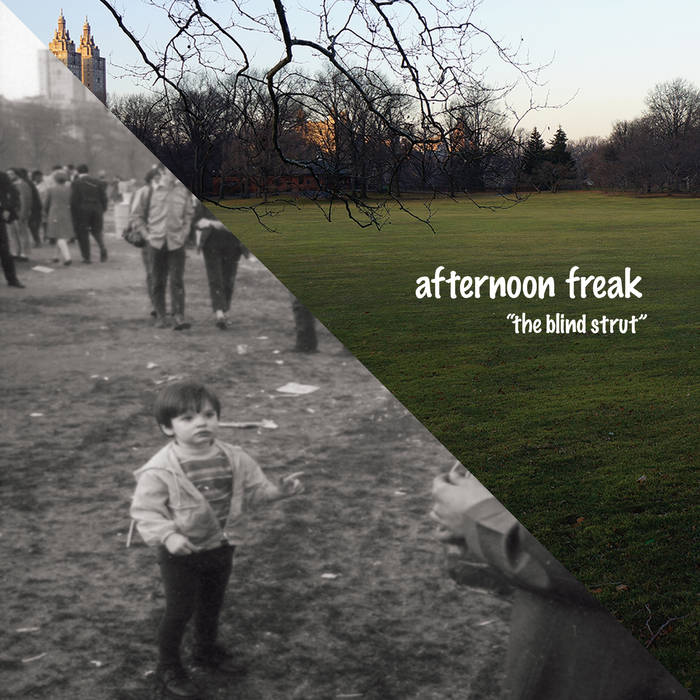 Danny Frankel :
the story of AFTERNOON FREAK from my perspective.
Chris Schlarb who i met via Nels Cline coordinated this combination of players.@ big ego studios in long beach,ca.
before i met Matt that day i had watched some y tubes of him and i appreciated his take on life . that day in the studio i was drumming and vocalizing NON SEQUITERS and i looked to my right and between 11 and 13 feet was Matt looking @ me and nodding his head with a straight face.

i thought that was the beginning of something intriguing.

and then add Watt (on bass) to the mix who i've appreciated his music history and philosophy for a long time .definetely since my arrival in los angeles from washington d.c.

as a trio i heard a very flexible travel logue of sights seen and not seen ...a wonderful day in outer space ! DF Joshua tree,California feb 15,2018

my inspiration for the afternoon freak proj got originally lit by big
ego studioman chris schlarb and it's to him I dedicated my involvement
'pert-near as much as I do the two co-conspirators matt mottel and
danny frankel who I joined up w/in chris schlarb's pad to create what
I'm hearing writing about: the debut album from afternoon freak, "the
blind strut" on joyful noise recordings as part of their "white label"
series. it was chris schlarb who also connected me to the good people
at joyful noise (jonathan and karl) who asked me to curate an album for
their series. in my mind it was totally natural this choice should be
the afternoon freak work cuz of the cats involved - made total sense to
me.

what chris schlarb provide for me was the opportunity to connect w/one
cat I had never met before who lived on a different coast and was from
another generation. this is proof to someone like me how powerful music
can be, it's got the stuff to overcome "realities" such as that in a
transcendent way. young matt mottel in my mind prolly instigated this
whole adventure but it was chris schlarb that made it a "reality" - he
chose a beatiful cat I've known a long time for stickman, danny frankel
who just last year joined me and incredible bass brother devin hoff in
a improvised trio proj called the emma goldman bust-out brigade so I
had an anchor to hold me fast in the face of the big scary sitch of
never having met keyboardman matt before.

the whole event involving us three... actually four - we gotta include
recordingman chris schlarb - happened in one afternoon (january 14,
2017) at big ego and of course for me it was a pants-shitter cuz of the
sitch but right away and one at a time everyone involved made me feel
more and more calm w/out losing proj focus and edge (one time when I
was recording my first opera and telling drummerman stephen hodges I
was scared he told me, "watt, sometimes being a little scared is like
being a little excited" and never forgot that), w/out losing the
"excitement" of not knowing what might result but still having the
nerve along w/your cats to throw the dice as hard possible w/fist in
the air yet having a trippy kind of humility all tied up there in the
crux - this is what I've found to help w/the listening, guitarman nels
cline has learned me that listening is most important improv collab
tool ever. also the BIG IDEA that life's a classroom and everyone's got
something to teach watt. that makes me feel really grateful to everyone
involved w/this proj to have watt aboard. hopefully I provide good glue
to stick stuff to for matt and danny - these brothers deserved nothing
less!

Matt Mottel :
The Blind Strut is only accomplished thru acumen, compassion and confidence . Spending time in the studio with Mike Watt and Danny Frankel created a cohesive unit almost immediately. There was a willful focus to be in the moment and make it count. Especially Watt and Danny; craftsman of the highest degree. I was honored to make tones rise on the positive trip with these guys. An 'afternoon freak' of the highest order thanks to engineer Chris Schlarb for having the intuition to pair us together. I left the session humbled that I had had the amazing opportunity to play with these master musicians and was way enthused by the results! Dig it and have proper time with this music . Thank you for listening ,

Mixed by Colin Langenus at Proven Recording in Brooklyn, NY

Bandcamp Daily  your guide to the world of Bandcamp

Interviews With Butcher Brown and Slauson Malone, plus LP of the week by SAULT.